Welcome to the latest edition of Curtain Up! This is NODA London’s newsletter and it is for all members of every London Society and Individual members. So please:

FORWARD THIS EMAIL TO ALL YOUR SOCIETY’S MEMBERS – IT IS FOR THEM AS MUCH AS YOU.

In the interactive session at the recent NODA London Theatre Festival, the most common phrases – when people were asked to say what they thought of Curtain Up! - were “never seen it”, “never heard of it” or “never read it”. We are evaluating how we can continue to make our communications relevant to all of the London amateur theatre world and to help with that, we need to make sure our communications reach as many people as possible.

Our mailing list contains over 700 email addresses, at least one for every society (and many more) but this must be only a fraction of the total membership of all societies. If you would like to receive information directly to you, rather than coming via your society’s NODA contact or secretary, please email me and I will add you to our mailing list.

In this issue – amongst other things - we look back at our NODA London Theatre Festival, welcome the new Rep for District 14 and carry the link to our What’s On listing, for forthcoming shows.

Our communications team is going through a revamp right now but in the meantime, and as ever, we make an appeal for content for this newsletter. Please send me your articles for the next issue of Curtain Up! We aim to publish it in mid-September, so articles to me by August 31st. Is your society doing something different? Celebrating a memorable anniversary? Putting on a new or rarely performed piece? I’m sure London would love to hear your news so don’t hesitate to drop me a line – and send a photo.

Invitations are starting to come in for me to visit your summer and autumn shows – I’ve even had the first panto invite! Karen and I will try to visit as many of you as possible and we are looking forward to it – so please send me an invite.

All the best for your forthcoming productions.

Attendees at this year’s Theatre Festival took part in an interactive question and answer session. We asked four questions and we give below the top answers and some other interesting feedback.

1. Give up to 3 good words to describe NODA London

Close behind those came: exciting, passionate, fun, helpful and welcoming.

Obviously, we are delighted to see those answers and this gives us a real boost, as your NODA London team, to know that we are appreciated.

However, we know that everything does not always work; there is always another side….

2. Give up to 3 bad words to describe NODA London

Other common responses were: old fashioned, inconsistent and out of touch. Interestingly when asked for bad words, a common answer was “nothing”. However, as nice as that is, we are more interested in where there is criticism.

The committee takes on board these comments and we will discuss at our next meeting. There was an invite for those giving negative comments to discuss at the end of the Festival or to email the Councillor. Unfortunately no-one spoke to him at the Festival and no emails have been received. This is a shame as we would like to understand the reasons behind some of those words.

We presume “biased” refers to the awards. We note this but would respond that in the awards we look to reward excellence but that that assessment can only ever be subjective. We are pleased that the awards are keenly contested and that people care about the outcome. Those attending the Festival were typically all District Winners and that is, in itself, a high accolade. Unfortunately, there can only be one winner of the Regional Trophy. We know that everyone believes their production was the best – and that is absolutely how everyone should feel. The judges work very hard to identify the “best of the best” but we know that those not fortunate to receive the Regional Trophy will always be disappointed.

We very much take to heart the feedback of “dated, “old” and “out of touch”. There is no doubt that those involved in the committee do tend to be those with more life experience, as typically they have more time to be Regional Reps and Officers. However, we work hard to be “young at heart” and to be open to new productions and new ways of producing theatre as much as the established formats. There is also an open invite for any adult of whatever age, to get involved with the committee or put themselves up as a Regional Rep. We are currently seeking a Communications manager to takeover maintaining Facebook and other social media, the website and this newsletter. That is a role that someone of any age can take on.

3. Talking of this newsletter we asked: What is your opinion of Curtain Up!?

Here, the top answers were:

However, other answers were: useful, informative and even “cool”. As we said, at the Festival, Curtain Up! is emailed to some 600 addresses – with at least one from every society. It is down to the person within the society who gets Curtain Up! to simply forward the email to their members.

It does appear that those who do receive it, value it.

4. Finally, we asked the following question: What do you think of your Regional Rep’s report?

The top answers for this question were:

These are very pleasing responses – and there were many more positive comments - but there is always another side. Some responses were: not constructive, basic, slow to come out and inconsistent. Again despite offering an opportunity for a more in-depth feedback, nothing has been forthcoming.

We will take all these responses on board and work to improve the service we provide to you – our members. 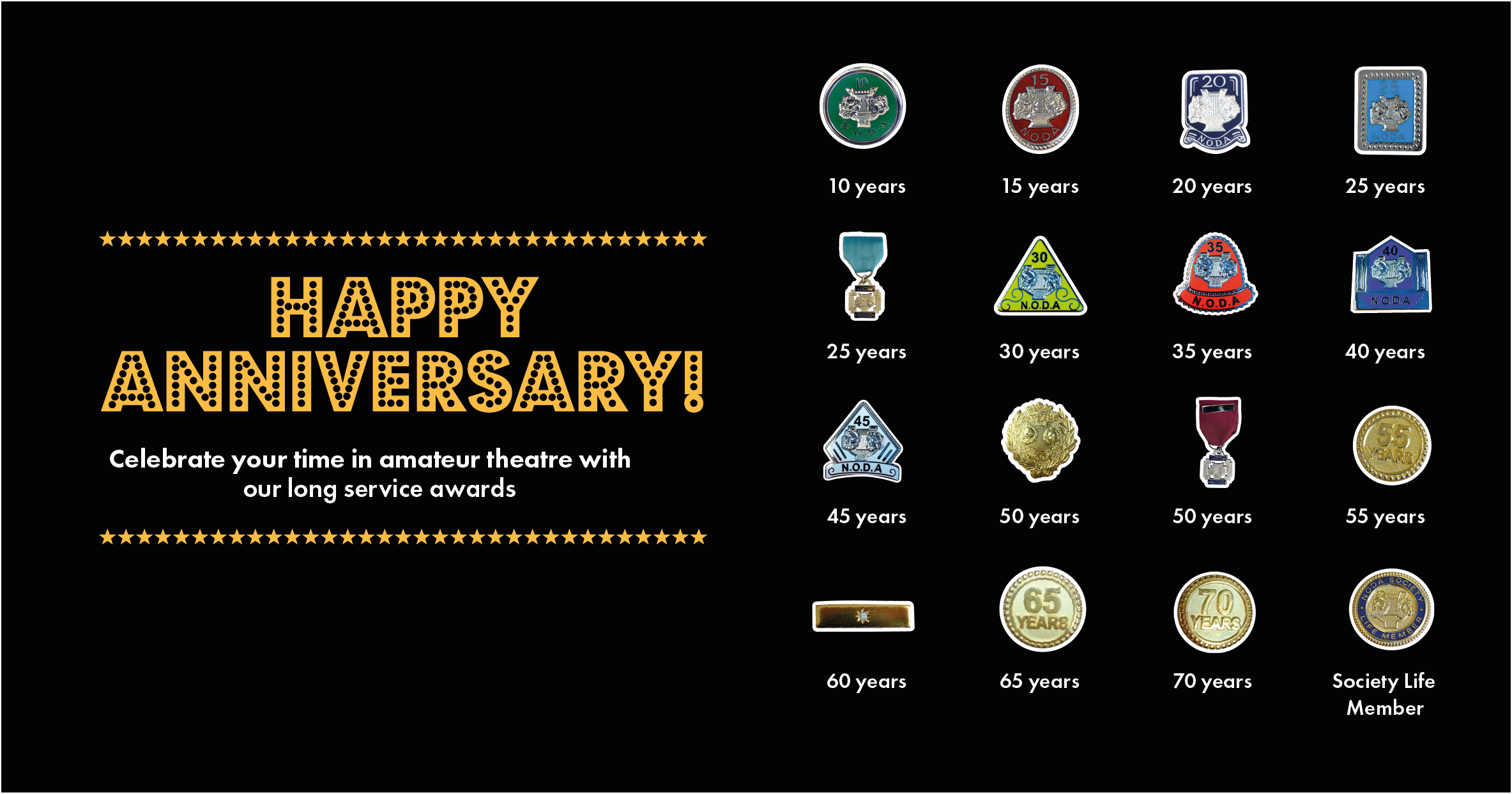 Celebrate your time in amateur theatre with one of NODA’s Long Service Awards or honour your Societies’ long serving and hardworking members by presenting them with an award.

Don’t forget, to qualify the length of service does not have to be with the same society or even – in earlier years – with a NODA society.

All we need is a form completed, validated by the current society, giving details of the length of service.

For those for whom medals may seem a little old-fashioned there are now badges, indicating the length of service.

On 9th June 2019, we gathered at the Radlett Centre for our AGM and Awards Day. The Festival started with a morning of masterclasses. Accents, Acting and Makeup were on the schedule this year and each was much enjoyed by those taking part. Gemma Wright returned with her huge palette of accents to bring us regional British sounds. Janet Harrison delved into how we say things when performing, not just what we say, focusing on pauses and inner meanings. Sue Robb-King showed us everything from a basic pan to frighteningly real scars.

After lunch and networking in the lobby café, where an excited buzz grew, the afternoon events in the auditorium began with a presentation from last year’s Youngstars Trophy winners, Musical Youth Company of Oxford. This was followed by the AGM and then an interactive session with the auditorium answering questions electronically - results and feedback below. During the AGM we said goodbye and thank you to Rosemary Roberts, leaving us as Editor, having served on the Committee for 9 years.

The day ended with the Awards presentation. Twenty-five trophies and the District Flames were presented by President Jacquie Stedman, making a poignant return to us – being up until last year, London Councillor. A full list of Trophy winners is on the NODA London website at https://www.noda.org.uk/regions/london/noda-london-regional-award-winners-2019

Next year the Festival is June 13th / 14th so please make a note in your diary. The steering committee has already started planning the 2020 Festival so watch out for exciting news and announcements. 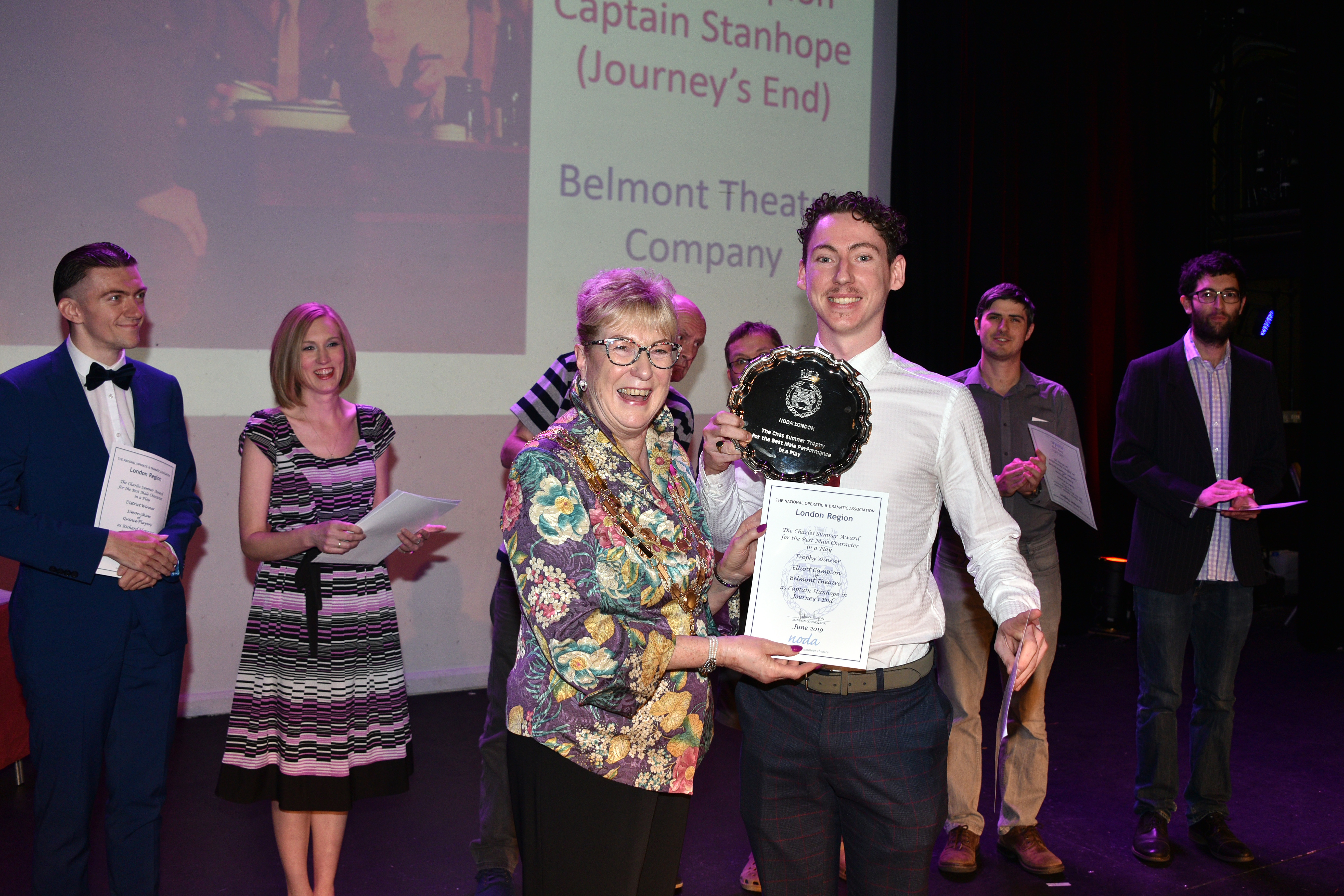 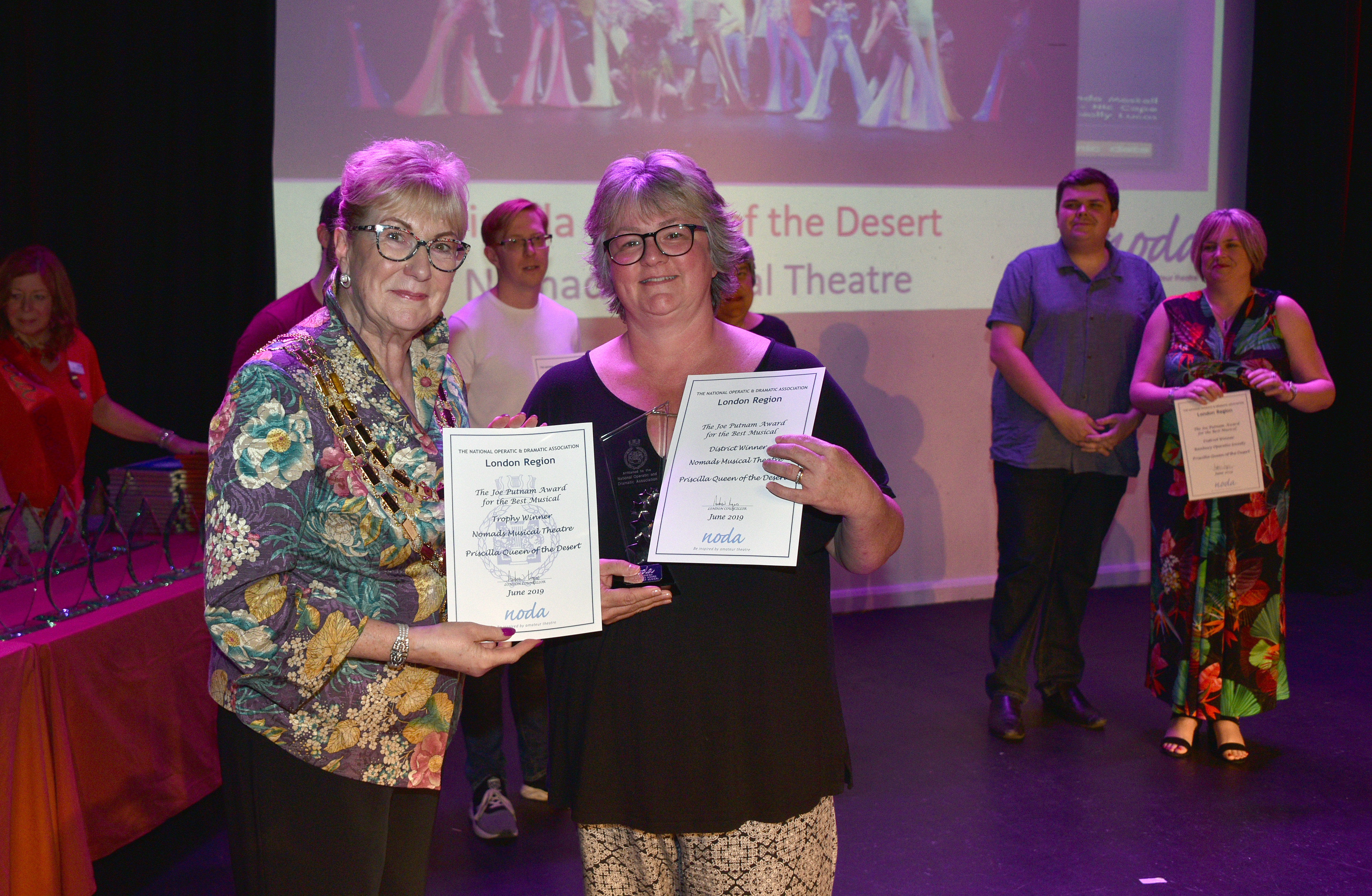 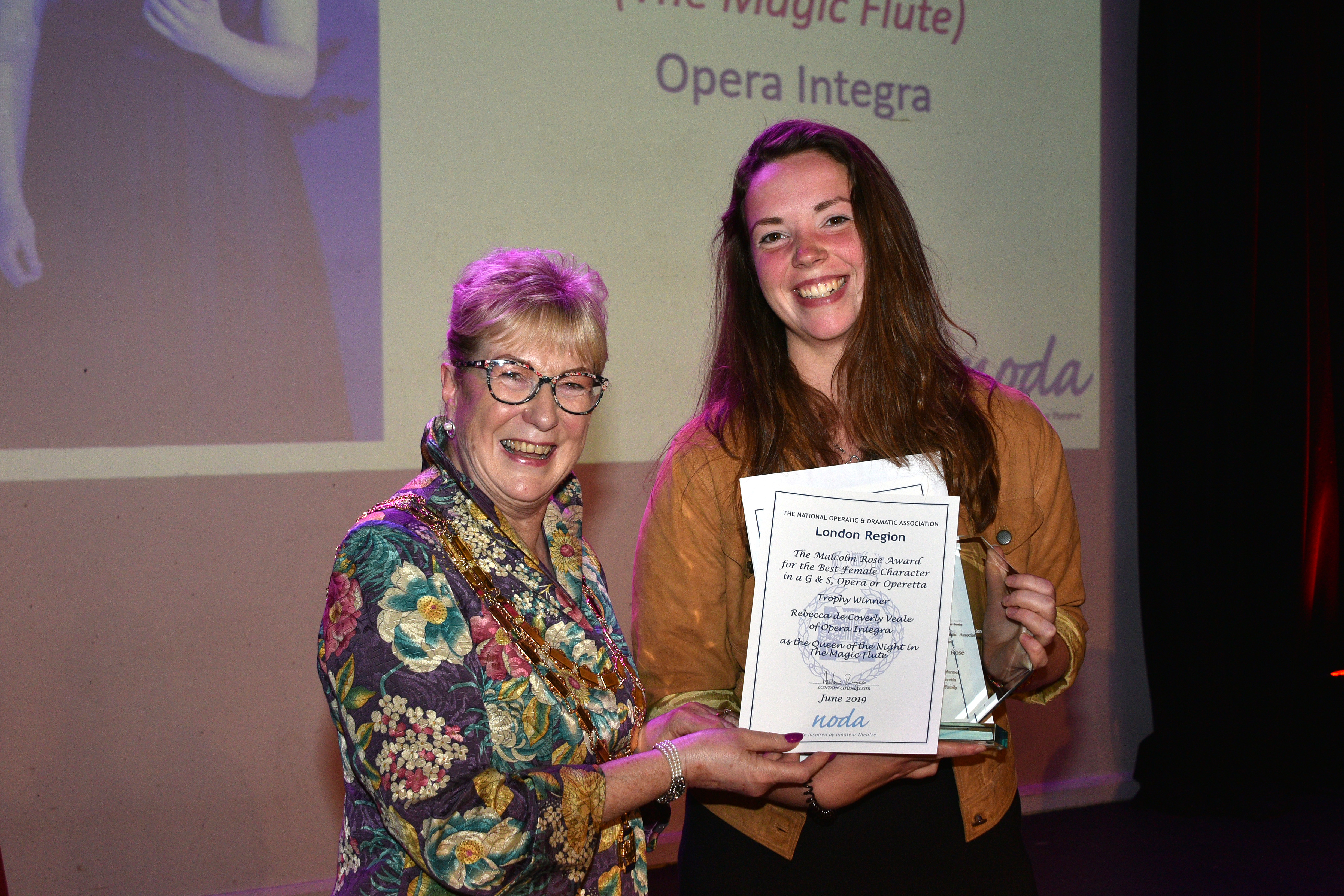 Situations Vacant - The NODA London Committee is looking for the following roles:

Working to pre-set deadlines, accuracy and reliability, and an ability to work independently - whilst always being accountable to the Councillor and the committee - as well as offering new ideas and concepts, are pre-requisites of the role.

Anyone interested should contact the NODA London Regional Councillor with a brief summary of their suitability for the role: andrew.rogers@noda.org.uk

Regional Reps for District 6 and District 7

Regional reps are the “lucky person” who is invited to attend your shows and report. They are also the first point of contact for societies seeking advice or help with all matters to do with their societies or productions.

We are currently seeking Regional Reps for Districts 6 and 7. District 6 is North-East London and part of Essex and District 7 covers Part of North London and SW Hertfordshire.

The most obvious responsibility of the Rep is to visit shows and write reports. This does require some time to be set aside in order to fulfil the obligation and provide the service. Depending on the District a Rep might see up to 30 shows a year, sometimes twice a week. Reports do take a few hours to construct. They also need a certain experience of amateur theatre, whether as a performer or backstage, in order to be able to offer constructive criticism. There are also a handful of committee meetings to attend – typically Sundays – as well as the annual Theatre Festival.

Yes, the role can be time-consuming but it is also great fun and a chance to put something back into amateur theatre.

We welcome John Woodward-Roberts as the new Rep for District 14.  John has been involved in performing in amateur drama and musical theatre for the last 40 years extending his reach in the last 20 years into directing and writing. He has performed many of the tenor and patter leads in G&S plus leading roles in Rodgers and Hammerstein (Curly in Oklahoma) and Lerner and Lowe (Henry Higgins in My Fair Lady) and other musicals. His rewrite of Orpheus in the Underworld was a finalist at the regional NODA awards and his reimagining of Princess Ida has recently been performed. He started a musical theatre group in Ascot nearly 30 years ago and served as its Chairman until very recently.

District 14 societies should contact John to request show reports and for anything else NODA can help with: john.woodwardroberts@noda.org.uk

Don’t forget, if you are holding your society’s AGM over the coming weeks and you have a new Treasurer, Chairman, Secretary or NODA contact, please let your Regional Rep know and update your entry on the NODA London website. It really helps us to provide you with the best service, if your details are up to date.

It might be a good idea to take a look at your entry on the website anyway. We believe quite a few are out of date or could be enhanced with more information, all of which will help you get more prominence for your society and its productions.

What's On In NODA London

In addition, you can download a list of all the shows coming up by clicking here. The list includes all the shows that we are aware of...no matter how far in the future that may be!

If you have a show coming up and you don't see it listed, then simply contact Andrew.

Below you can find the details of all of the NODA London Committee and District Representatives.