The Sound of Music

As Bobby Knott explained in his excellent Director’s notes in the programme, The Sound of Music is based on the true story of the Von Trapp family who fled Austria in 1938 on the eve of the Anschluss and settled in America where they had a very successful career as a touring singing musical group.  A story that is familiar to us all, starting off as a Broadway hit in 1959, coming to the Palace Theatre London in 1961, and memorably the Oscar-winning film in 1965 starring Julie Andrews and Christopher Plummer.

It’s an ambitious undertaking for an amateur group to take on such an iconic and well-known story as The Sound of Music and I have to admit to some trepidation as the day approached.  How wrong could I be!  From the moment the curtain went up and the sound of the nuns chanting filtered through, I was blown away. This production was inspired.  I was totally absorbed by the acting, the singing, the characters, the scenery, the costumes and the atmosphere.  It is sometimes a temptation to add personal preferences to the rhythm of the music or the story in general but Director Bobby Knott and his team stuck to the traditional in every way, which gladdened my heart.

Peaslake Players are very fortunate to include several professional actors among their number whose acting, and particularly singing, added that extra dimension, but this did not detract from the rest of the cast who more than lived up to their more experienced colleagues and performed faultlessly.  Each one took on the persona of their character and they acted and reacted with each other without the hint of a break or loss of concentration.  Every member of the cast believed in their role and they acted it out to the very end.

The singing (and acting) of Ellie Quinn (Maria) and Karen Holmes (Mother Abbess) was flawless and they were very strong together.  Climb Every Mountain had me reaching for my handkerchief, as it does every time I watch the film!  The singing numbers with Maria and the children were outstanding – beautifully choreographed and well rehearsed.  Chloe Hackett as Liesel (Team C) also stood out and shows great promise for her future career in the Performing Arts.  Lee Johnson (Captain Von Trapp) was endearing, strict, anxious and finally honest about his feelings for Maria, which was something of a surprise to both of them, having been convinced by Brigitta that they were in love!  Adrian McLoughlin (Max Detweiler) was suitably worried the whole way through, constantly trying to persuade Von Trapp to conceal his nationalistic beliefs for the sake of his family.  Emma Cade (Elsa Schraeder) was wonderfully elegant, imperious and snobbish while trying hard to find favour with the children but eventually recognising that she was no match for Von Trapp’s feelings for Maria and gracefully departing.  Tristan Rich (Rolf Gruber) interacted well with Chloe Hackett as Liesel, showing a tender teenage love between them before turning into a hostile Hitler Youth but redeeming himself at the end by not revealing the whereabouts of the family while they hid in the Abbey garden.

The show benefited from the expert musicianship of Brian Steel, Musical Director, who performed wonders on his sophisticated keyboard, producing sounds such as church bells, whistles, even a full orchestra, all the while unobtrusively conducting some of the group numbers - which had clearly been so well rehearsed, they didn’t need to look at him!

The simple costumes were very effective.  The ‘uniforms’ for the children followed by their outfits made out of the curtains and the authentic nuns - all had to be made from scratch – a lot of work for the costume team.  Baroness Schraeder’s outfits were suitably glamorous, showing off her figure to perfection.

The dramatic back drop and legs portrayed a scene of rugged snow-covered mountains with grassy meadows in the foreground and this served for the whole production.  Simple flats of a Chapel interior for the Abbey and French windows serving the bedroom and the Villa terrace were brought on and off with little fuss.  A bed, a chaise longue, and a wrought-iron terrace table and chairs, were also used to good effect.  With a very ingenuous flip of the legs by cast leaving the scene, the legs were swung round to reveal giant swastikas to accompany the arrival of the Nazis at the Kaltsberg Music Festival, with appropriate dramatic music.

Full use was made of the stage and the Hall with entrances and exits from all sides.  The children’s marching and singing routine up and down the stage steps was slick and entertaining.

Bobby Knott put on a truly memorable production which I understand was a year in the making.  No detail was overlooked and the enormous effort and hours of work from the whole group certainly paid off.  Huge congratulations to him and his team for a superb show, which will be hard to match. 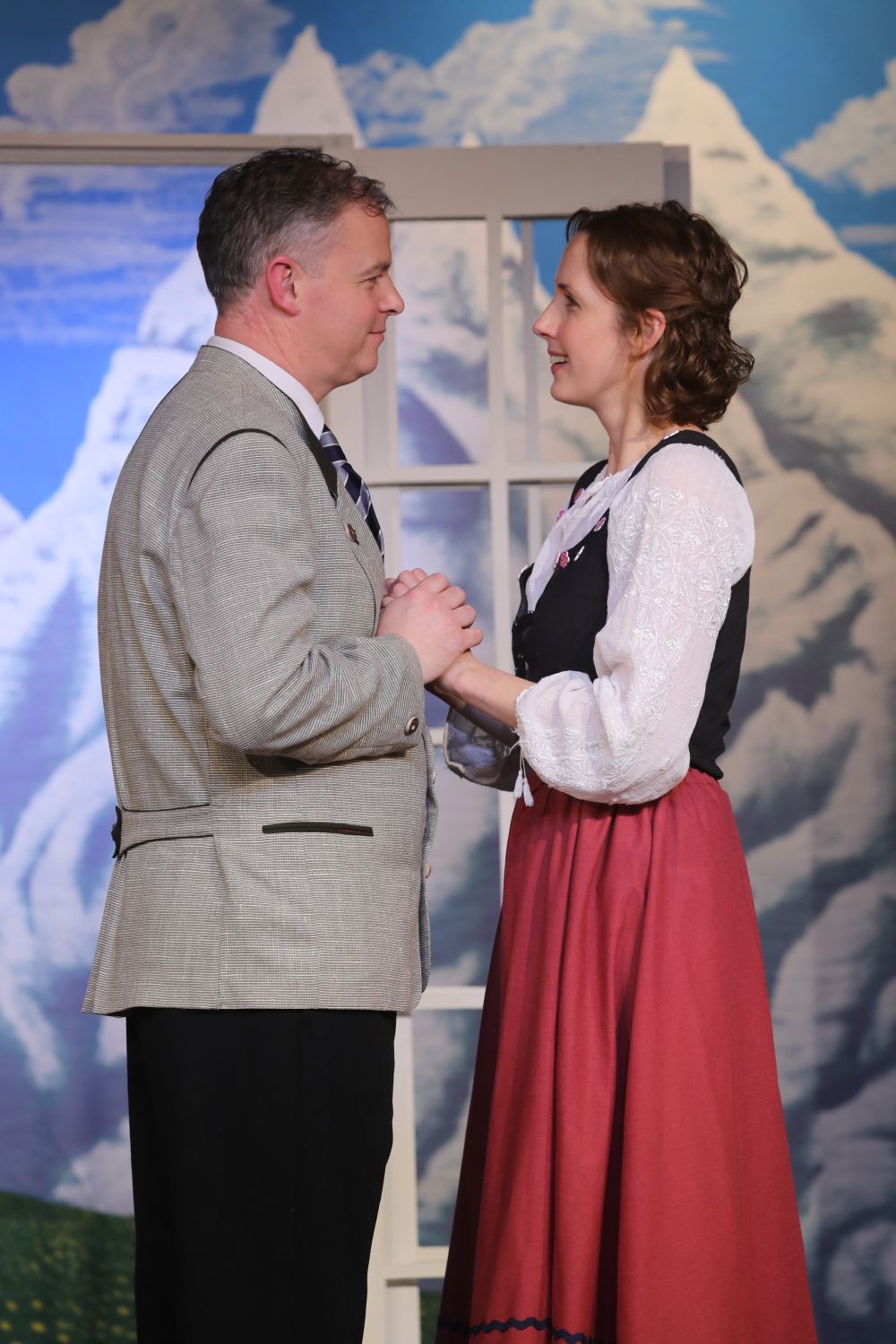 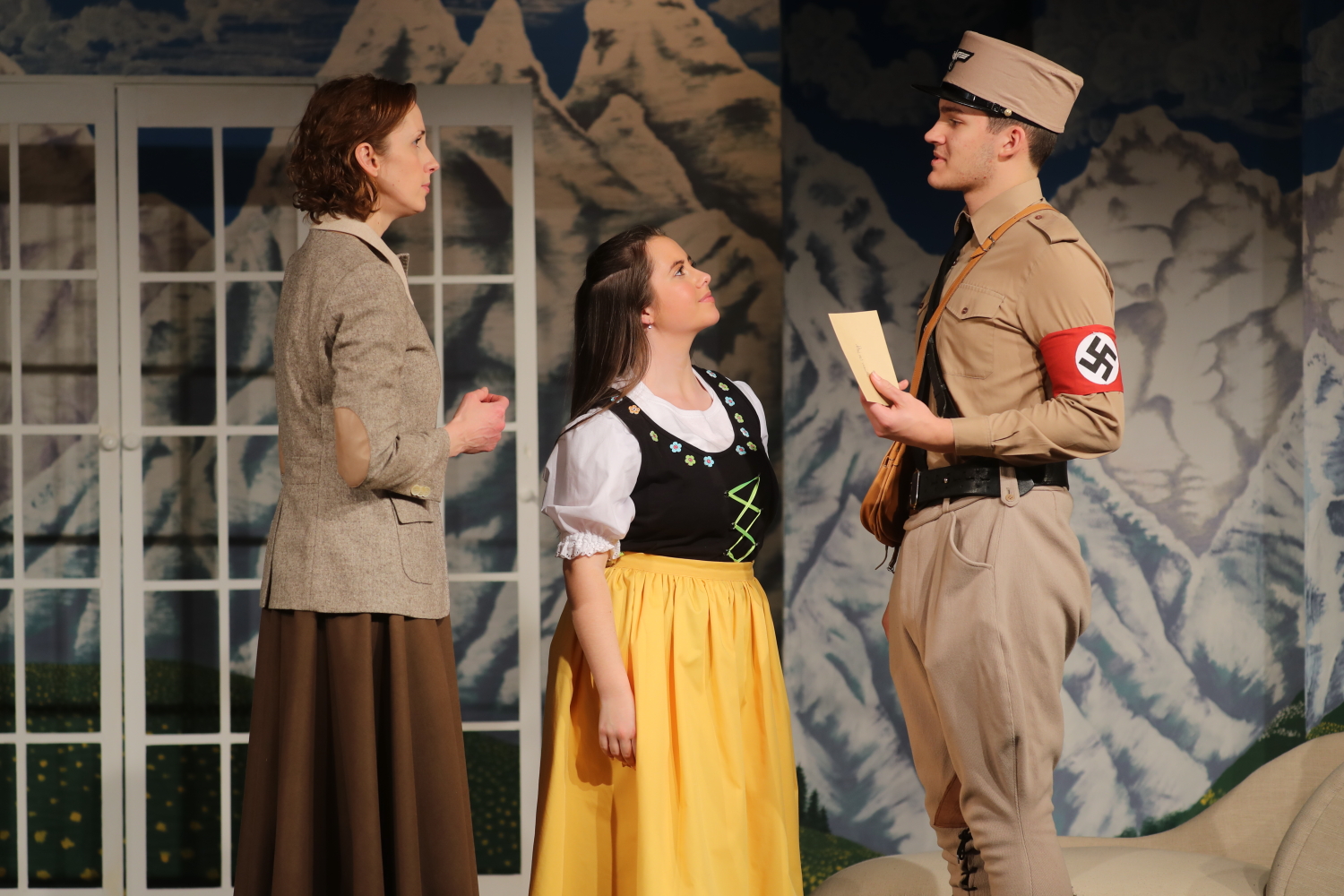 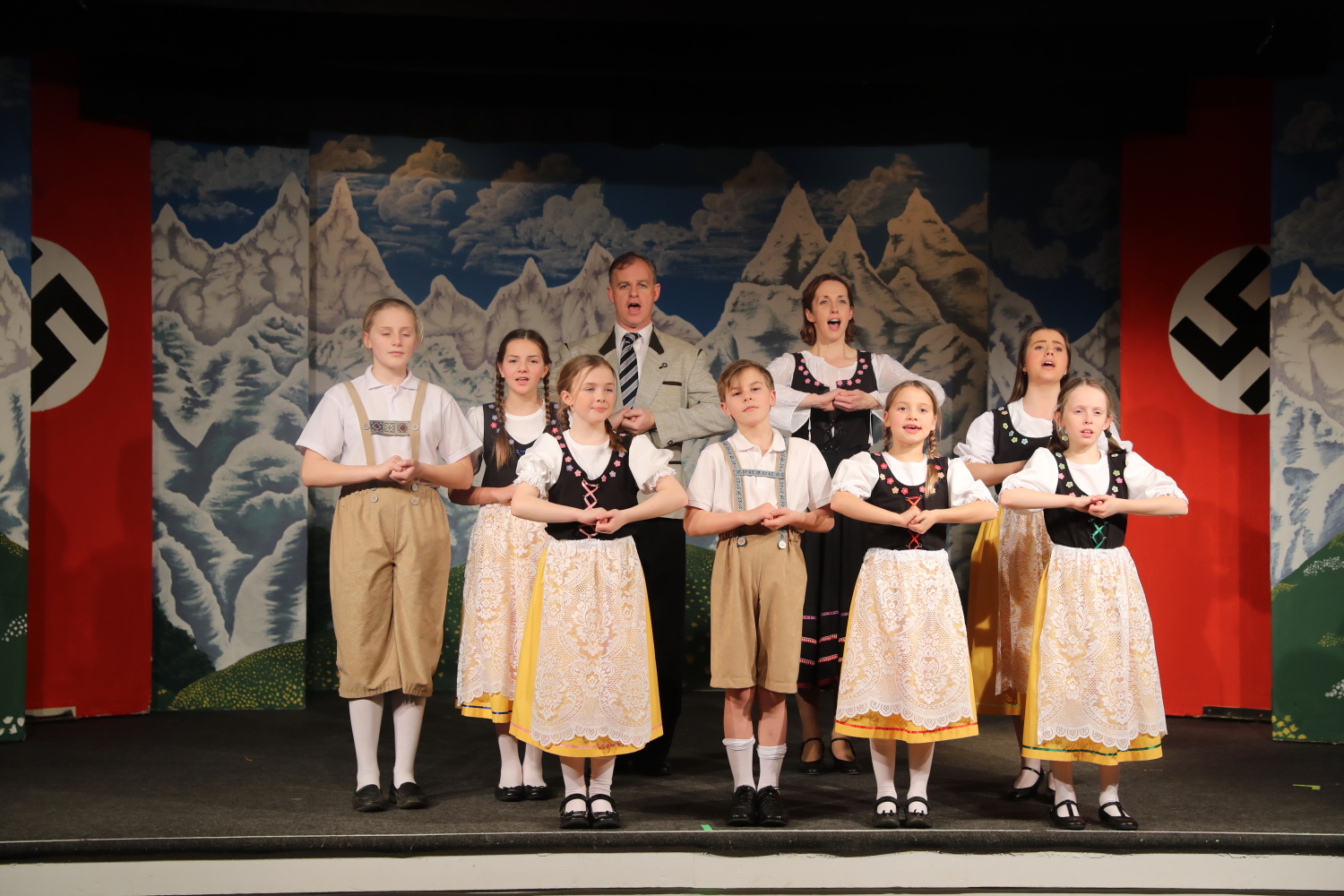