A satire of 19th Century Gothic drama, this operetta, which premiered in 1887, is full of beautiful heroines, dastardly villains, and a wonderfully costumed variety of ghosts! Despite a shaky first reception, coming as it did so hot on the heels of the Mikado, Ruddigore became over time a great success, and is considered by many to be a favourite. Having so enjoyed this GOS production, I can quite see why!

A good deal of thought goes into GOS’s programmes, and I always really enjoy reading them, they are so informative. This one was no exception, with a good double page spread on the opera itself – its history, its reception, its inspiration, which was so useful. A page on the Director and Musical Director; a G and S quiz; a list of the musical items; cast profiles; an excellent and necessary synopsis of this complicated plot; a history of the society; and a piece on Ghoulies and Ghosties in our culture, all made fine reading. A nice touch was also a piece on GOS’s long-serving Stage Manager – good to see recognition of the skills of the Production Team, and I look forward to more such pieces in the future. Photos of the chorus and the orchestra, and of past productions of Ruddigore, were also a great addition.

The curtain opened onto a pretty village scene with a beautiful coastal backdrop, which was very pleasing. In Act 2 we were transported into the Murgatroyd baronial hall, with its ominous gallery of family portraits. The bridesmaids carried pretty flowery arches in the wedding scene.

Costumes were sumptuous and delightful, and makeup was so effective, that I failed to recognise some members of the cast quite well-known to me over the years! The bridesmaids looked charming in their white gowns, and pretty white red-bowed shoes, with flowers in their hair. Mad Meg’s wildness was emphasised in her wild, flowing dress, and equally wild hair, in the first act, before she was transformed into modest Victorian black-clad, soberly coiffed wife in the second. Rose appeared in a couple of stunning gowns with pretty bonnets. The gentlemen of the chorus looked very smart and attractive in Act 1, no wonder they were greeted with glee by those village girls! These gentlemen then, of course, emerged from the portraits in the second half, clad in such a variety of costumes – cardinal, knight, admiral and so on, that I couldn’t stop gazing at them. Wardrobe Mistress Elizabeth Atkinson really knows her stuff, obviously, and great costumes do so add to the enjoyment of a G and S opera.

Musically, we knew we were in for a treat right at the start, with Musical Director David Wright conducting a very fine overture. The orchestra were excellent throughout, and the balance of singers and instruments was just right.

So, such a pleasing start – the fine overture, the beautiful set, and then the opening chorus of stunning bridesmaids: ‘Fair is Rose’. Attention to detail is something that ensures a fantastic production, and here the Cornish accents were a really nice touch, sustained throughout. Also the fine arrangement of the bridesmaids whilst Hannah was singing ‘Sir Rupert Murgatroyd his leisure’ impressed me. As professional bridesmaids they were obviously well practised in arranging themselves so prettily. The liberetto was very finely enunciated, and I especially appreciated the pronunciation of the ‘ed’ on the end of past participles, as in belovED. famED, unclaimED. This clarity enhanced the audience’s understanding of the text.

Rose and Robin Oakapple (Katie Plummer and Alec Evans) gave us a fine rendering of the duet: ‘I know a youth’, and Rose used her book of etiquette very humorously, then, and throughout the proceedings. Never more so, perhaps, than when she conversed with our jaunty mariner Richard Dauntless (Tim Dutton), who thrilled us all with his nifty hornpipe! Their trio: In sailing o’er life’s ocean wide’ was wonderfully well balanced, a joy.

Then suddenly, here was Mad Meg (Zoe Avern). We were spellbound by her mad, wild laughter and screeching, as well as by her story, and her dramatic and beautiful ‘Cheerily carols the lark’ with the ensuing ballad ‘To a garden full of roses’.

All change in Act 2, as Old Adam Goodheart (excellently played by Richard Arthur) appears finely dressed as the Valet de Chambre of Sir Ruthven Murgatroyd (Robin Oakapple as was). The scene has changed, of course, to the ominously gloomy picture gallery in Ruddigore Castle.

The emergence from their portraits of all those alarming, and then rueful ancestors, who then ‘tortured’ poor reluctant Sir Ruthven (Robin) into realising that he really did have to carry out one crime per day, was a delight. Sir Despard Murgatroyd (Simon Wilson), the dastardly villain who had so mistreated Mad Meg, was then the dutiful, if starchy, reformed husband of the same lady in Act 2. Both performers here were wonderful – full of humour, they acted and sang so well. I loved Margaret’s relapses into mental instability, and Despard’s frantic calls of ‘Basingstoke!’ to restore the dutiful District Visitor, as she had latterly become, to the necessary sobriety.

The reluctant Sir Ruthven orders the abduction of a lady from the village. Adam Goodheart returns with a very indignant Hannah, of all people. Once the witch’s curse is reversed, Hannah and Sir Roderick are reunited. Nora Price, of course, made a wonderful Hannah, she sings, she acts so well. And GOS, having discovered that the performer originally cast as Sir Roderick was indisposed, was lucky enough to engage at extremely short notice, the very man, Lee Power, who partnered Nora Price in that role in 2008. What joy! A fine ‘There grew a little flower’ ensued.

Director Ian Henderson gave us a marvellous and refreshing Ruddigore, well cast, with great acting, fine voices, impeccable timing, bringing out all the humour there was to be had. The chorus were superb in every way, as one has come to expect from GOS. Overall a thoroughly enjoyable evening revelling in the glories that are G and S. 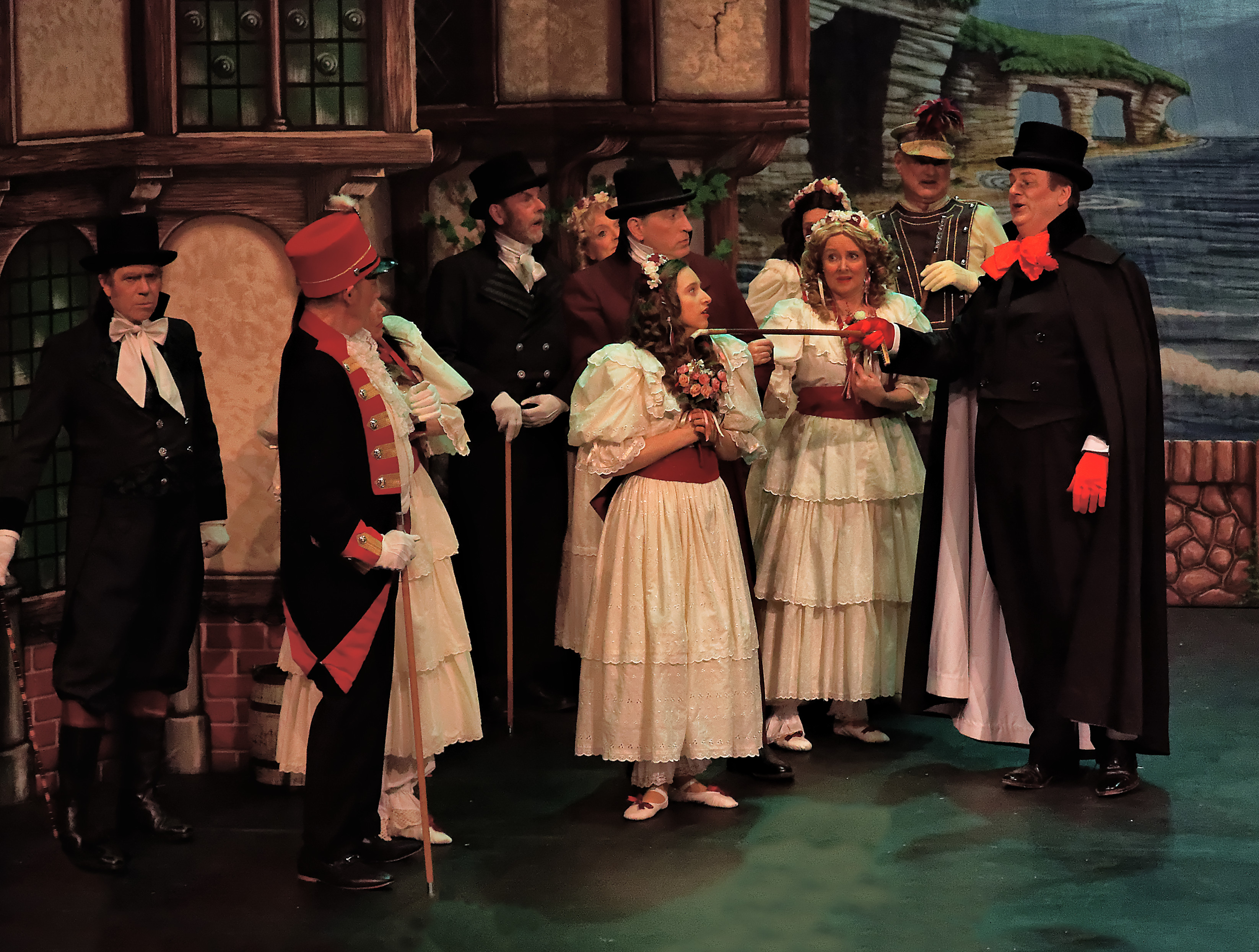 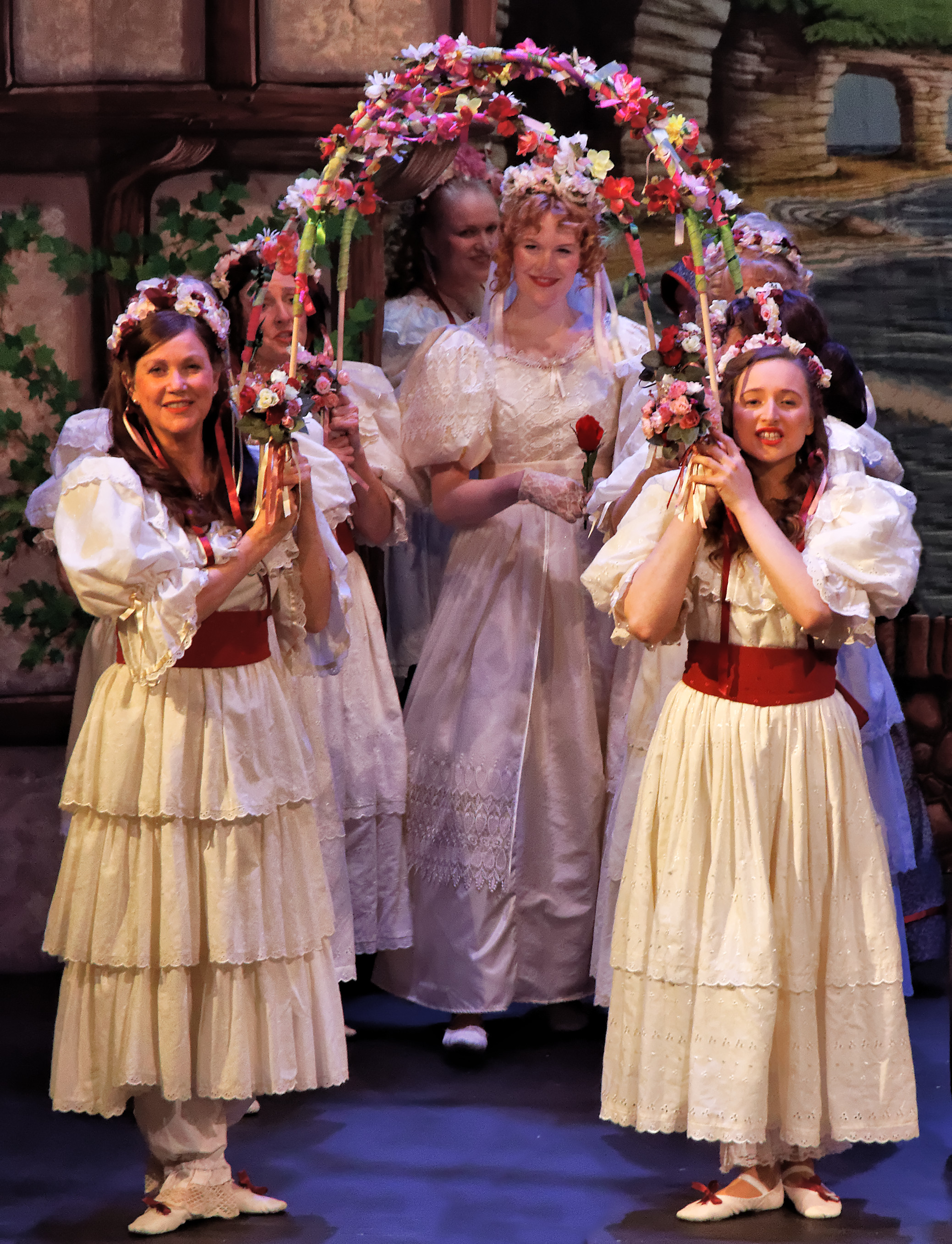 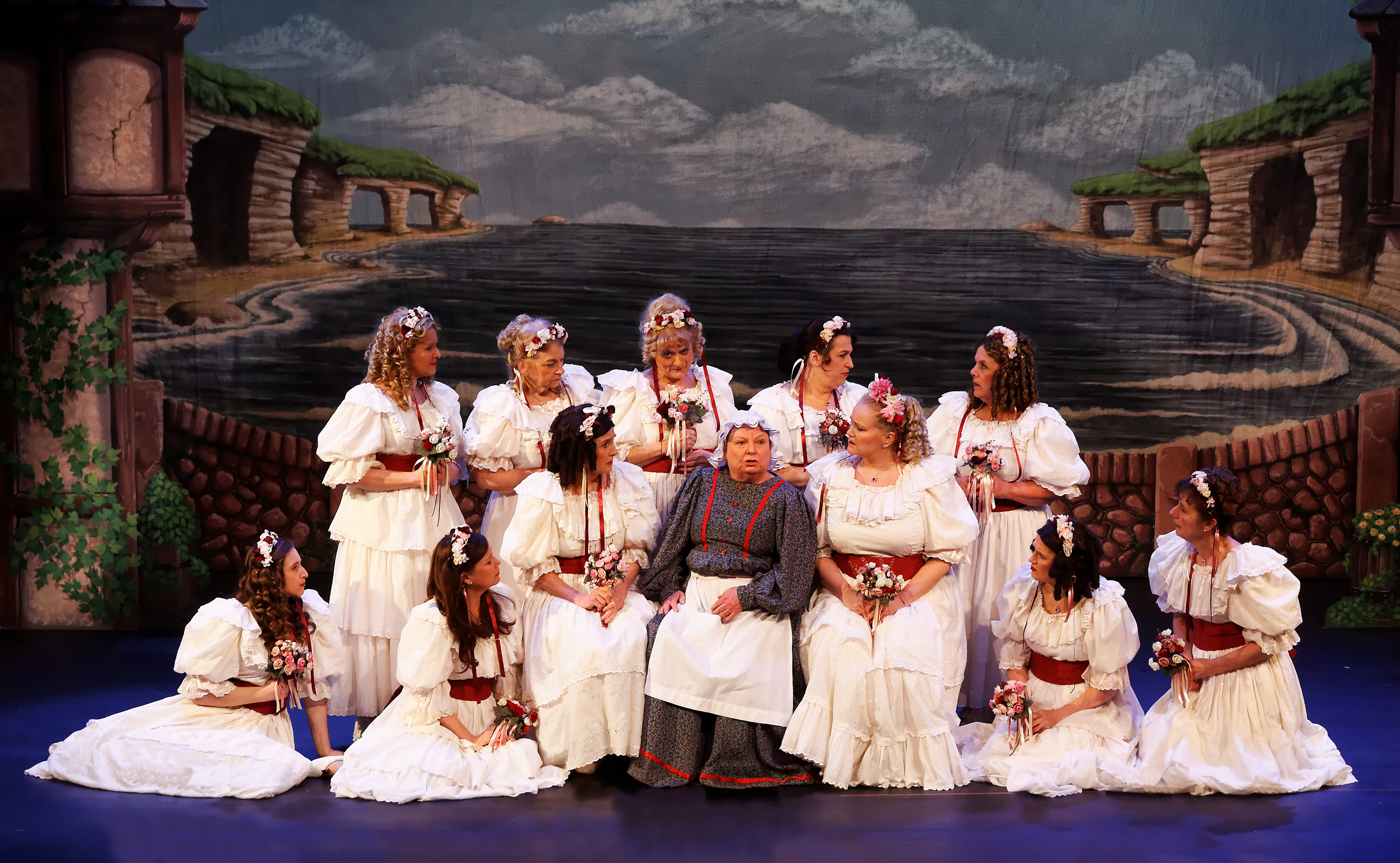 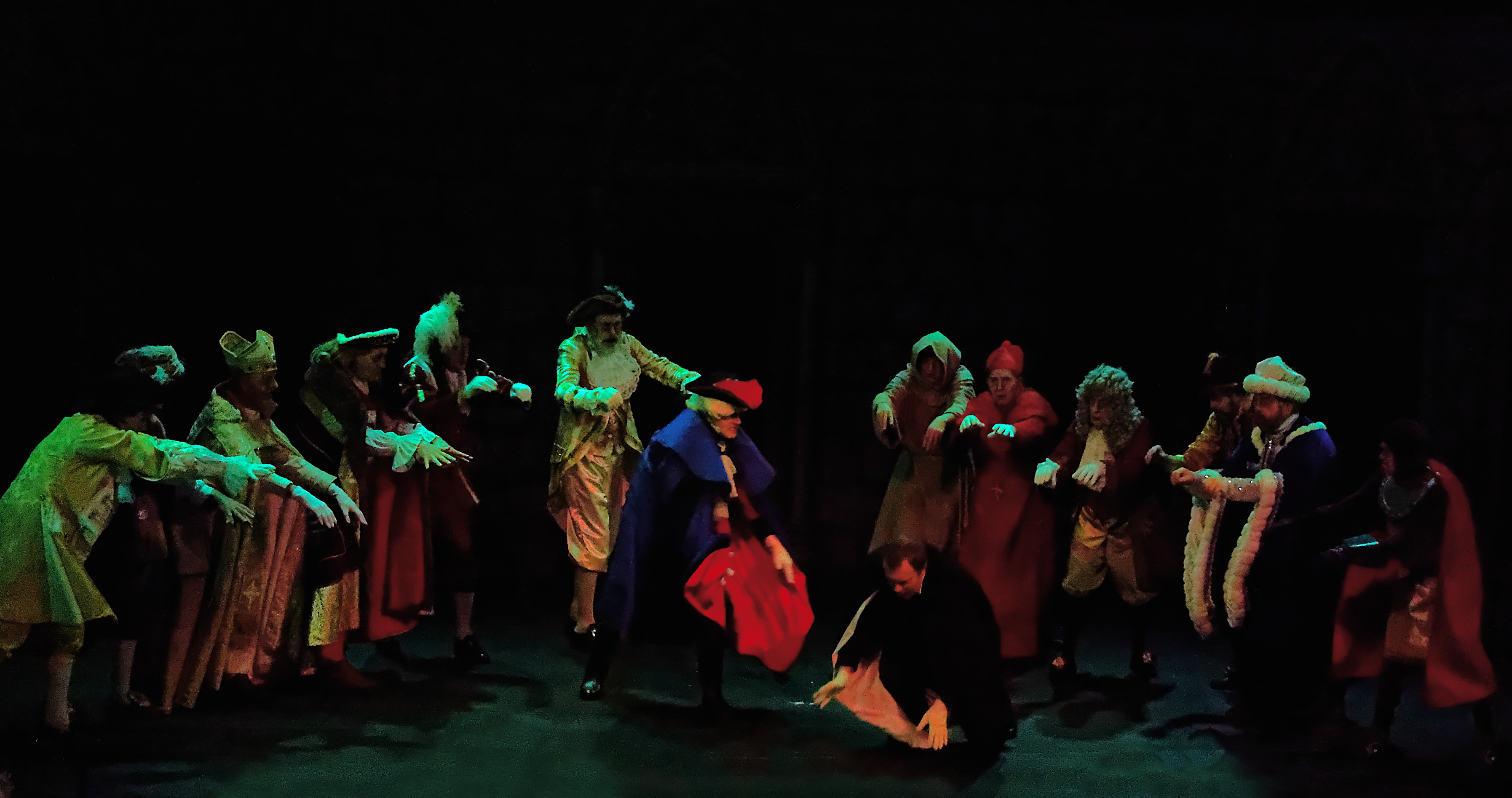 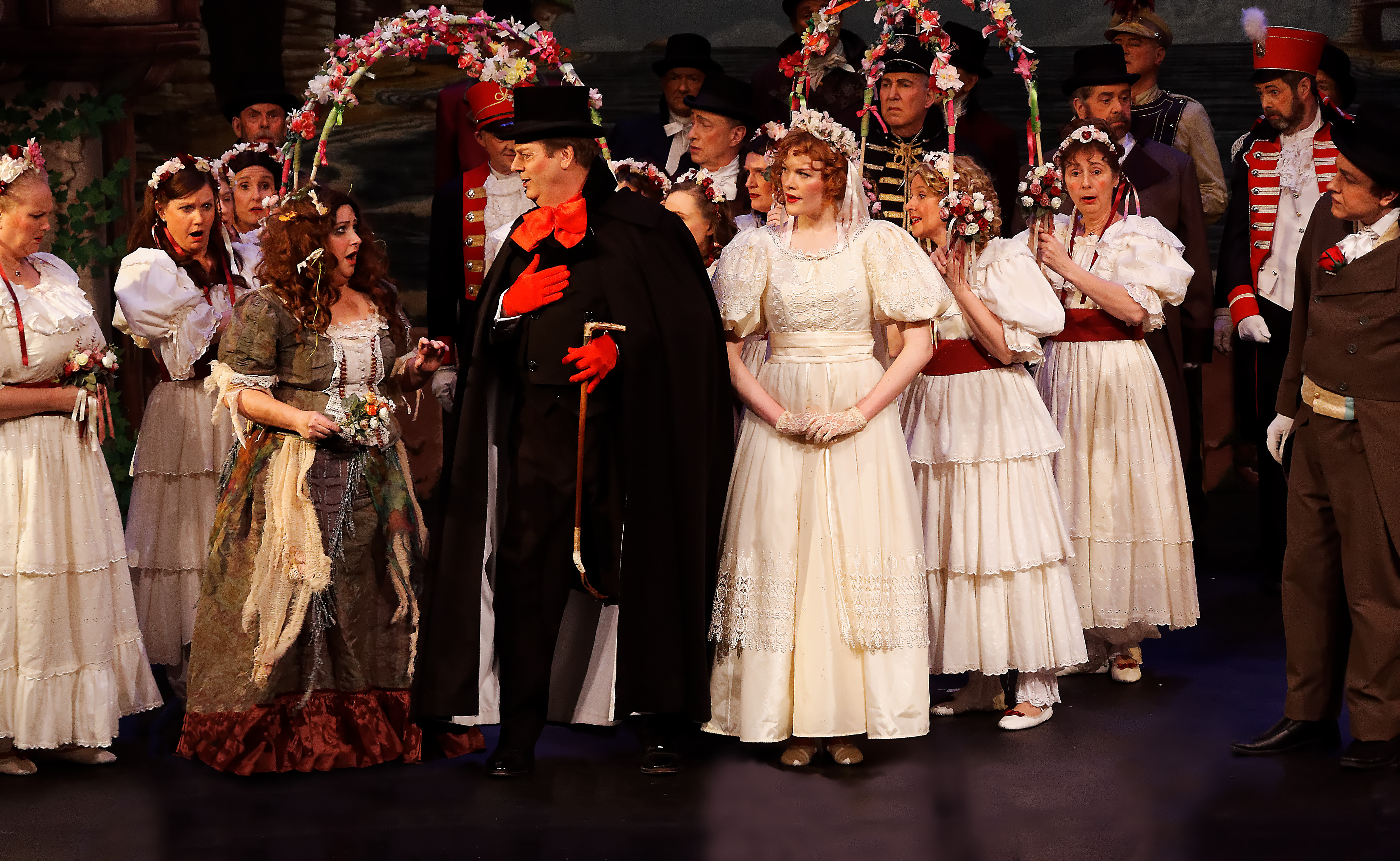