This is a challenging, thought-provoking, yet highly entertaining drama, the first written by Olivier Award winning dramatist Jessica Swale. It deals with the fight for women’s education – more specifically for the right to receive degrees from Cambridge, which lagged far behind other British universities in this regard.  The college in question is Girton.

Having previously put on this play in Guildford a few years ago, Guildburys were invited by the National Trust to repeat it at Hatchlands Park, where Fanny Boscawen hosted meetings of the Bluestocking Society, of which she was a founding member.  The thrill for the audience, and the challenge for the Guildburys, was to perform this play in Hatchlands delightful Music Room, a somewhat confined space, long and narrow.  Of course, Guildburys rose to this challenge masterfully!

Guildburys reliably produce excellent, usually A4 sized programmes. They are thin, but jam packed full of fascinating information, great design and fine photos.  The front cover of this one was wonderfully blue stockinged! We were given a piece on Frances Boscawen and her legacy; a piece on Jessica Swale; an explanation on how the expression ‘Bluestockings’ came about; a timeline on ‘First women’s graduations at British Universities’, with the date for Cambridge tantalisingly omitted (to be revealed at the end of the play).

A history of the founding of Girton College, its brave pioneering members, and their progress towards their goal followed, and as a contrast the attitude of leading male scientists of the day, Maudsley and Darwin, who taught that ‘women were intellectually inferior to men’.

Gilly Fick’s Director’s Note gave further food for thought, and thanked the staff at Hatchlands for their assistance in making this ambitious undertaking – 26 scenes in 19 locations – possible in the confines of this intimate and beautiful room.

Scenery was a superb backdrop of a chained library, and long corridors leading off from it. Above the library was a row of cutouts of the silhouette, the spires and domes of Cambridge, which so added to the charm of this piece, and sense of location. Good design by Robert Sheppard. Props included a marvellous ancient bicycle, as well as a flagon of brandy, and a set of well-used glasses, a gift-wrapped telescope, and of course books, books, books.

Costumes were delicious! The exquisitely sewn, delightful gowns for the ladies, were late Victorian fashion at its best, glorious also in silhouette with discreet bustles. Wonderful attention to detail and colour, a feast for the eyes indeed. This is typical of the Guildburys’ high standards – they truly realise the importance of NOT scrimping when it comes to costumes, as they do so enhance audience enjoyment of a production. The men were also very finely clad in elegant suits, sometimes black tie, or 3-piece tweed. or long jacket with brocade waistcoat and opulent cravatte, always well fitting, as though they had come straight from Saville Row. These men, whether student or don, always looked the part.

This play is a delight from start to finish, which allows everyone to shine. It makes you angry, it makes you chuckle, it makes you think, and it fills one with thankfulness to have been born mid-20th century as you realise how hard those pioneers (female and male) had to battle to bring about such necessary change.

So in the case of Guildburys’ tremendous cast, everyone did indeed shine. Marvellous casting on the part of Director Gilly Fick meant that all our characters were very believable indeed, from the stuffy Dons, through the inspiring Girton staff, down to the cheery (usually) students, male and female. One felt one was back in the halls of academe oneself, so real and vital did it all seem.

Jonathan Constant played the forward thinking, kindly and lively Girton lecturer Mr Banks so well, greeting the young lady students with a bicycle, symbol of the modern world of speed, to encourage them to grasp all things new. He was a treasure, and so alive. Disappointment was to be his, (and ours, thanks to the fondness he was able to inspire in us through his fine acting), when he was promoted to a fellowship, only to have it taken away from him when he refused to stop teaching at Girton.  The champagne remained unopened.

Kathryn Attwood was a commanding presence as Mrs Welsh, the pioneering Mistress of Girton, upholding standards, propelling Girton forward on its path to equal recognition. Kathryn was able to express all the nuances of Mrs Welsh’s struggles and dilemmas, as she upheld discipline, impressed upon her girls the attitude and behaviour necessary if they were to win through, argued against the suffragist cause, knowing that it would ruin their chances of success at the university senate vote. A brilliant performance.

Brilliant too was Caroline Ross as Miss Blake, the inspiring science lecturer, able to command attention, and instil that love of inquiry and learning from the moment she first addressed the young ladies. A suffragist she, and the dialogues between her and Mrs Welsh over the correct path to take were masterly. Inspired casting of these two, and so well executed. If we read about these conflicting attitudes in a book, we would soon forget it, whereas I won’t forget THIS.

The four young ladies, so wide-eyed and amazed at their good fortune, were all great characters. Maeve, (Alice Walsh), shy, gentle and serious, dedicated to making the most of this chance, then tragically called back home on the death of her mother to care for her young siblings.  Carolyn (Lauren Phillipou), the well-travelled, fun loving, almost flippant seeming one, yet nevertheless determined to become a doctor, eyes flashing as she defended her right to do so.  Celia (Claire Howes) was the one you would want to be your close friend and confidante, sensible and insightful, yet also very jolly and encouraging. And finally Tess (Hannah Cartwright), the one who fell head over heels in love, then had the dilemma of what to do now she could no longer focus on her studies, and was unceremoniously dumped by her beau for a more suitable Newnham girl. One really felt this was a group of girls one could have fitted into just like that (a few decades ago!). Magnificent performances.

The four male students were also played full of character. The bully Lloyd, (Cameron Watson) SO fixed in his opinions, so aggressively rude, smirking all the while, so entitled – a great portrayal, and humourous too. The sensitive and kindly Will (Gareth Turner), childhood friend of Tess, protective and later smitten with her, converted to the cause of female education through his friendship with her. Jack the Lad Edwards (Ian McShee), king of the Drinking Game, yet disapproving of the crass insults, and later violence of Lloyd, yet afraid to defend the ladies for fear of blotting his copybook with the Dons.  Last but not least Ralph (Joe Hall) our Lothario, one of the lads when it came to sessions in the bar, but susceptible to the charms of an attractive and intelligent lady (or two, as we later discovered).  All these fellows were exceptionally believable, their characters clear for all to see. It was a delight to watch their interaction with each other, full of humour and also rivalry.

The three Dons, the girls’ chaperone Miss Bott, and the maid Minnie were all well delineated characters, and the Librarian reminded us of what libraries used to be about!

Each performer here gave of their very best. With great direction from Gilly Fick the play’s characters and themes came to brilliantly to life, the costumes remain in my mind too, and the set. A fine rounded production. Congratulations to all involved. 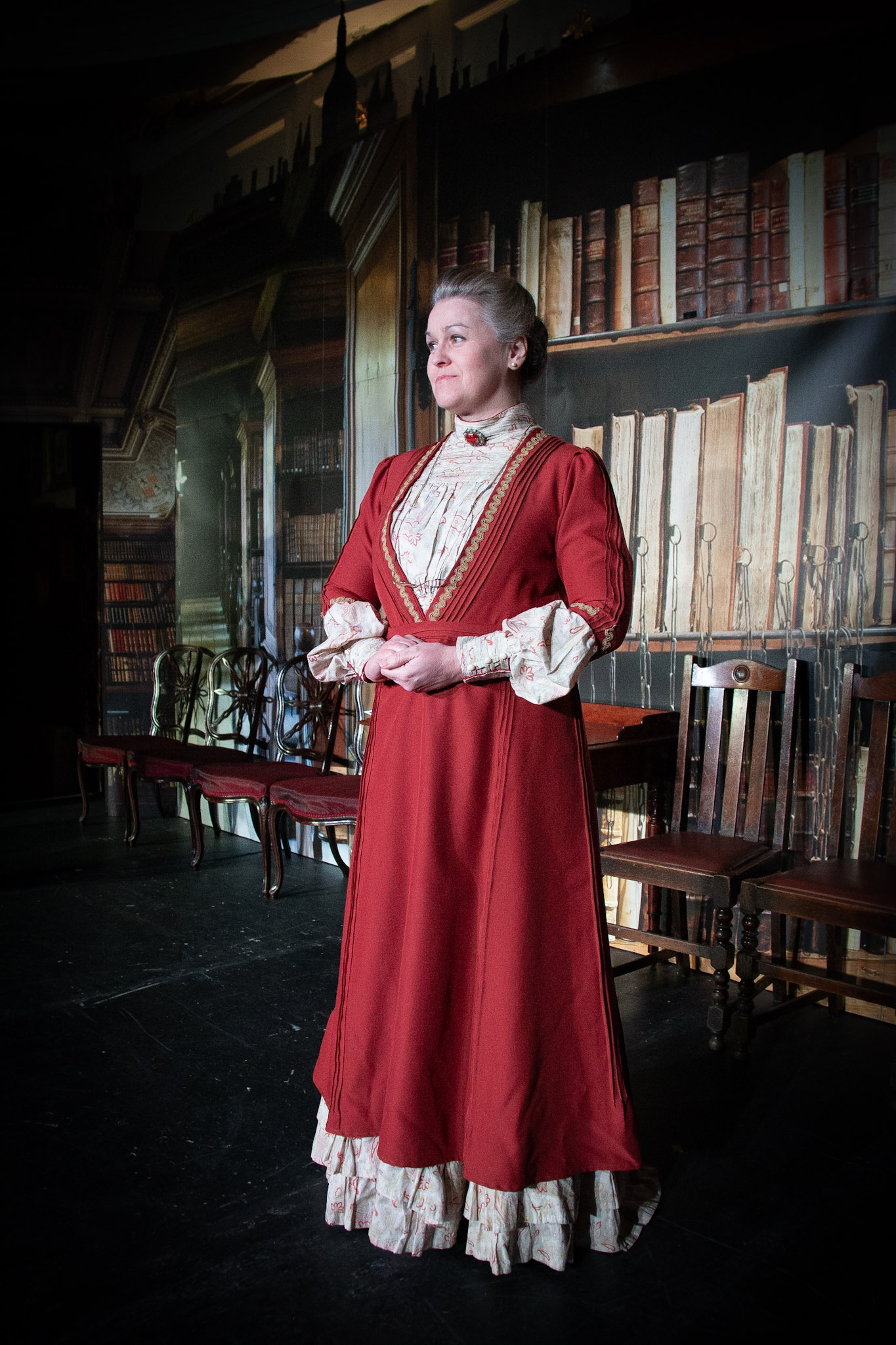 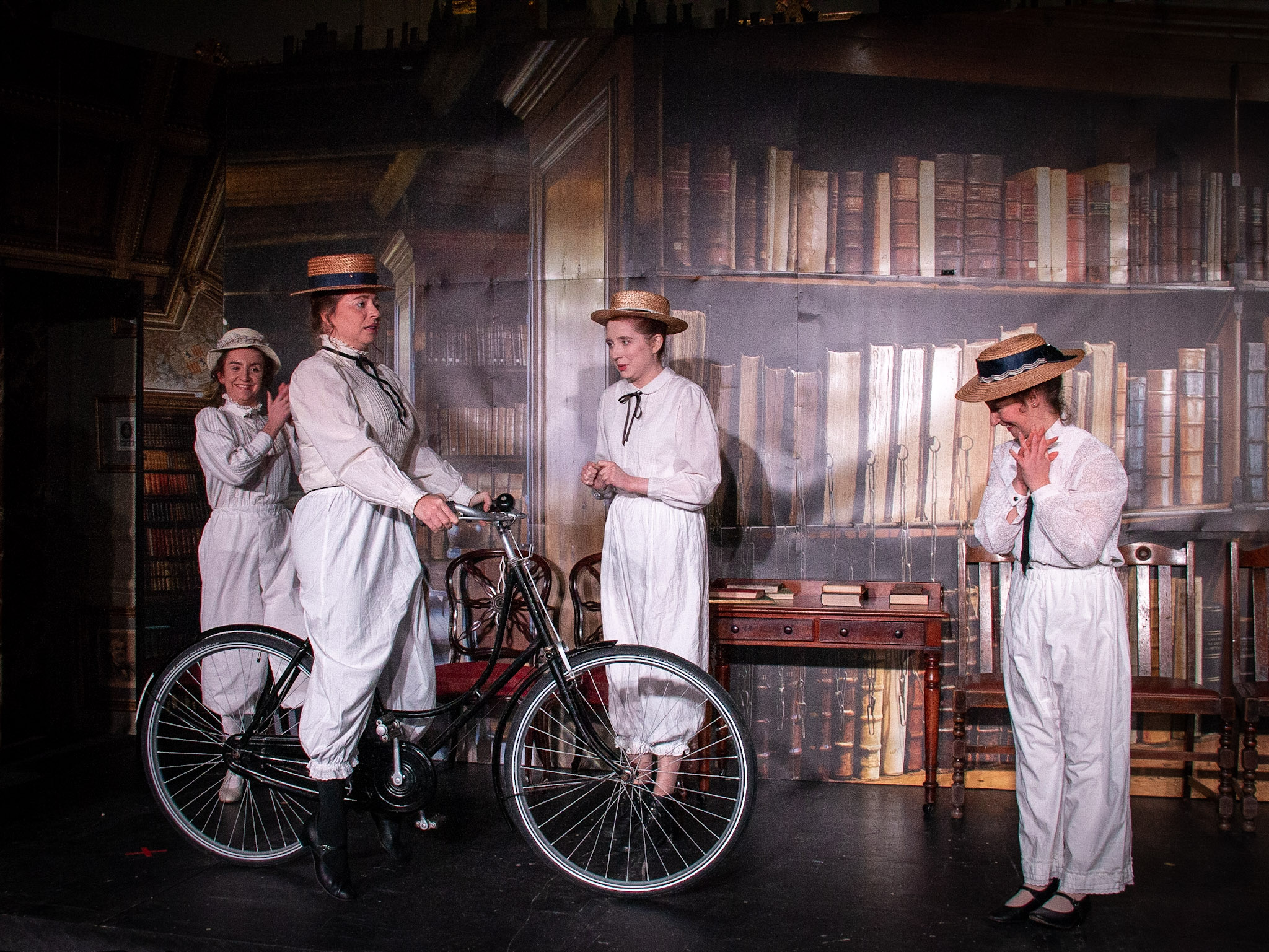 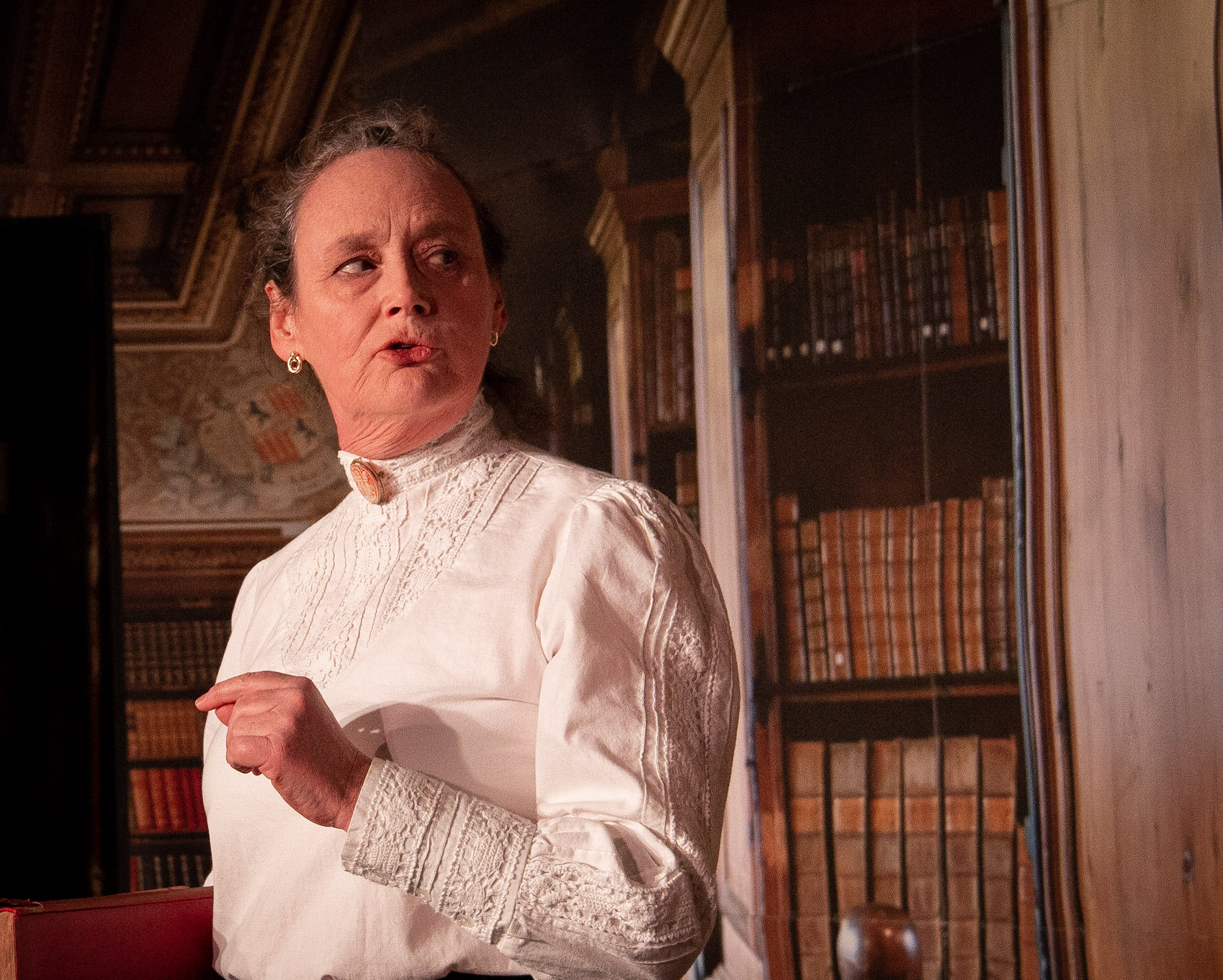 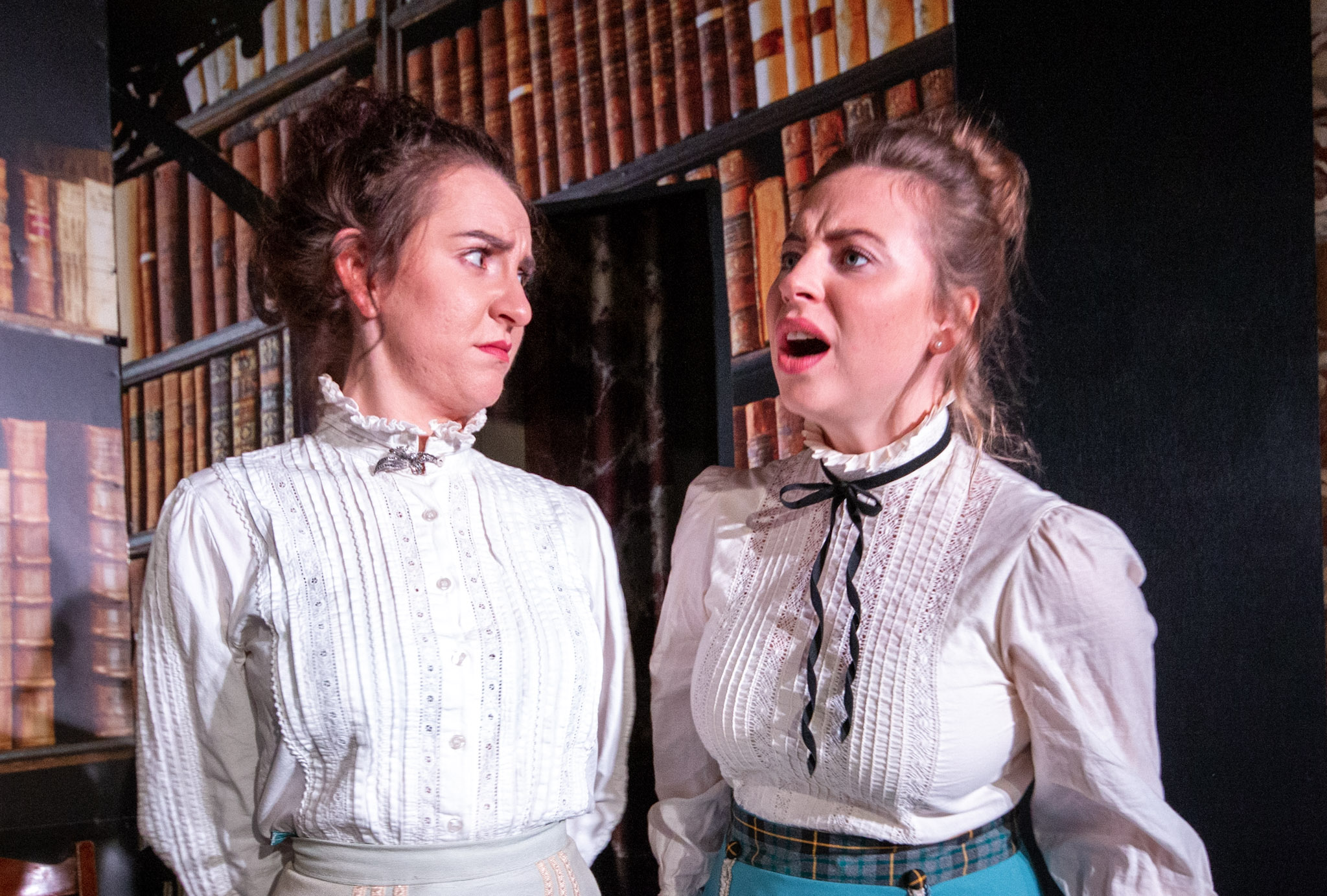 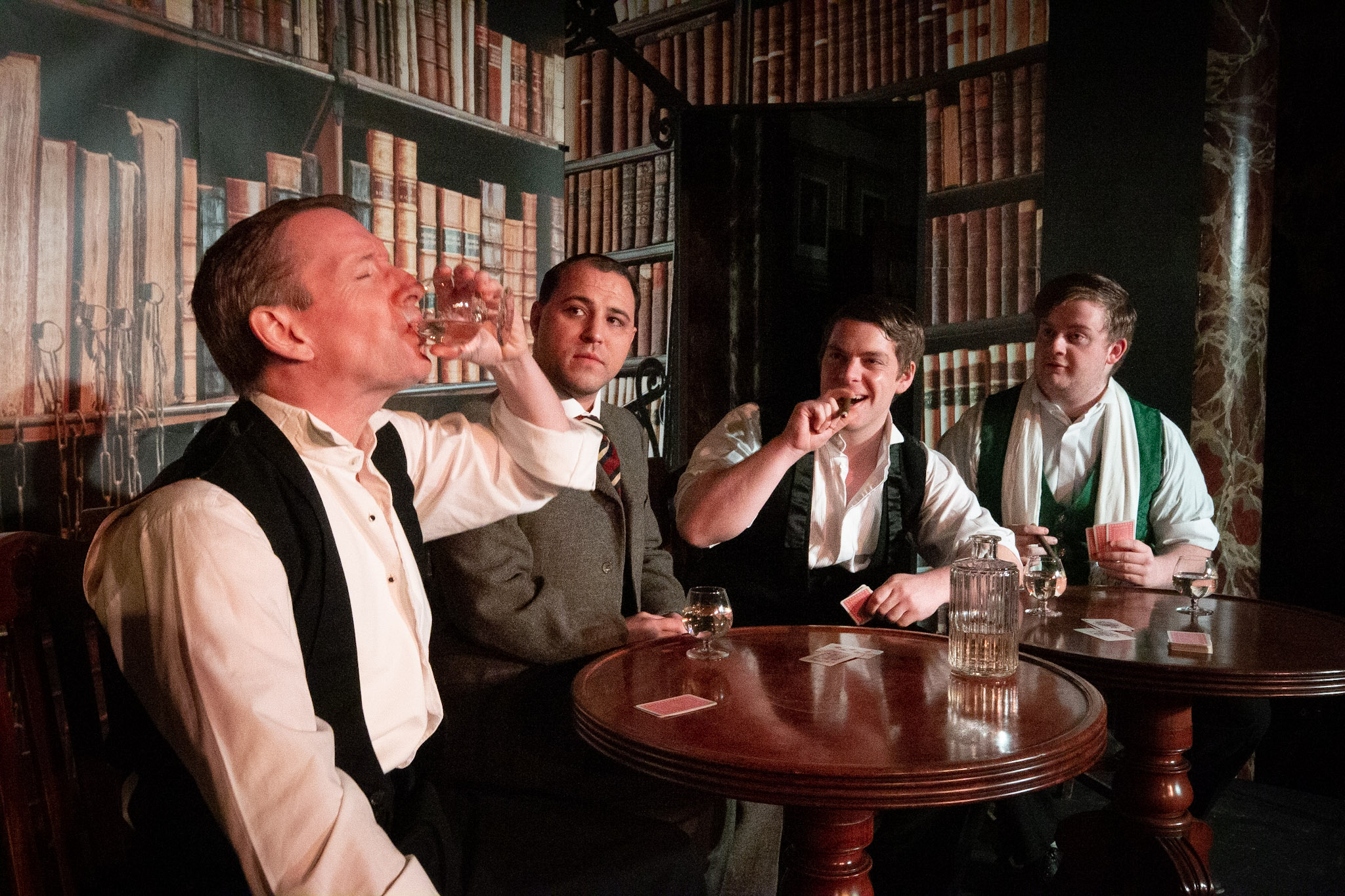