South Pacific is full of wonderful songs and has an engaging storyline that is both funny and serious. It also has thirteen Scenes in Act 1 and twelve in Act 2. Knowing the performance area at the school and the fact that scenery etc. has to be taken away after each performance I wondered how the group was going to cope with this formidable task, but, cope with it they did. The sets were simple with some excellent props and ‘stage dressing’ and the scenes were kept flowing by the additional help of the cast in the taking on and off of said items. Good lighting and sound effects added to the overall ambience. Julie Clifford was ideally suited to the role of Nellie Forbush. Her sweet singing voice, her natural stage presence and her effervescent personality enabled her to display all the diverse emotions that Nellie undergoes. Emile de Becque was played by Mick Whitehouse who was also the Co-Director of the show. Whilst I didn’t feel he was ideally suited to the role, he delivered a very confident performance. Dale Shaw’s good acting skills were in evidence as Lt. Joseph Cable and stepping in at short notice to play Liat was Michelle Simpson. The two had a great chemistry which was not surprising, as they are engaged! Chrissy Smith’s portrayal of Bloody Mary was superb. She played the range of emotions effortlessly and although she hasn’t a particularly powerful voice her singing of ‘Bali Ha’i’ was so expressively and movingly interpreted it was just wonderful. Paul Holland as the ducking and diving Luther Billis was first-rate. He brought out every inch of humour in the role and what great hip action he has! Derek Hulett was very convincing as Captain Brackett and was ably supported by Ken Radmore as Commander Harbison. I thought the men as Seabees, Sailors and Marines were a very enthusiastic and entertaining bunch as were the ladies as Ensigns and Islanders. I especially loved the rendition of ‘There is Nothing Like a Dame’, it was splendid. Emile’s children Ngana and Jerome were delightfully played by Milly Billington and Nathan Sawyer.The many and varied costumes were excellent. Congratulations to everyone involved in making this a very enjoyable production and to John Forman for the photographs. 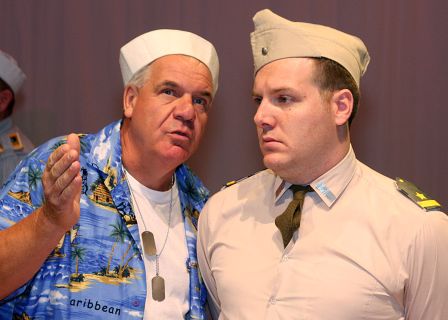 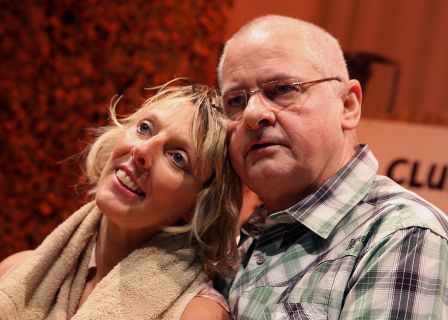 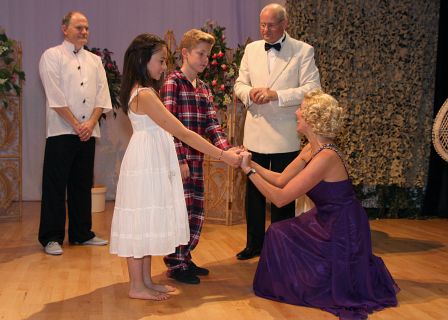