It was very apparent from the programme front and the 2nd. World War posters and sandbags that festooned the performance area that this was not going to be the traditional format for this production as was also the case when the group performed Patience ten years previous. Then the theme was modelled on the TV programme ‘Changing Rooms’ but this time it was to be based on ‘Dad’s Army’. Instead of being a milkmaid, Patience, played by Helen Booker, was now a Land Army Girl. Helen has a lovely singing voice and her delightful facial expressions enabled her to capture every aspect of the characters innocence and naivety. The Twenty Lovesick Maidens, well thirteen actually, have now become ‘lovesick ladies’ and what a captivating ensemble they were. They are all in love with Reginald Bunthorpe, who is now not a poet but a flamboyant film star, who is in love with Patience. Simon Brister gave a perfect portrayal of Reginald with his over-the-top posturing and theatrical exuberance, a great performance. The childhood love of Patience, Archibald Grosvenor a pompous, egotistical film star, was superbly played by Jim Fearn. His charismatic stage presence and his powerful singing voice were sublime. Nic Wilson was first-rate as Colonel Calverley, now a wannabe ‘Captain Mainwaring’, and his dragoons, now the Home Guard, were a real miscellany of characters and their antics were so funny, I loved the ‘cricket balls’ on the end of a pitch fork that one of them carried instead of a gun. Liz Mckenzie was elegant and graceful as Angela and Susan Deveney as Warden Jane, brought out the comedic aspects of the role splendidly. Offering good support was David Stokes as Major Murgatroyd, Chris Hannant as the Duke of Dunstable, Katie Henwood as Saphir and the young Lizzy Blades as Ella. What a truly lovely, sweet singing voice Lizzy has. Additional words were by Nic Wilson, the producer, and Angela Robinson. The additional music arrangements by Max Taylor of such tunes as the theme tune from Dad’s Army, White Cliffs of Dover and Run Rabbit Run added that extra special touch to the evening. The orchestra under the direction of Melanie Gilbert was terrific as was the singing of the solos, duets, ensembles and chorus pieces. Nice costumes, effective lighting and sound all added to make this an enjoyable evening. The performance was dedicated to Christine Gilman, a founder member of the Society, who played the role of Patience ten years ago. 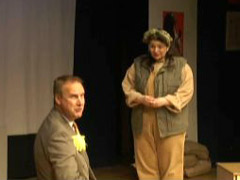