‘Miss Saigon’ conjures up images of war, violence, prostitution, exploitation and love, hardly subjects one would think of for a show involving just young people and yet, young people do go to war, do get into prostitution, do fall in love, get married, have children and are all the time, particularly in todays climate, bombarded with images of war and other atrocities via the media so perhaps one shouldn’t be surprised that ‘Miss Saigon’ has been licensed (the School Edition) for young people to perform. However, accepting all the afore mentioned, the music itself, is exceptionally difficult and you do need strong singers to cope with the very demanding score. So, how did The Young Performers cope with all this - well, brilliantly. Seventeen year old Laura Davey was outstanding in the challenging role of Kim. Her lovely voice, her convincing portrayal of an innocent, naive teenager and quickly changing to a fiery, devoted mother was superb. Curtis Salmon, who is just fifteen, gave a passionate and caring performance as Chris. His powerful singing was terrific and the duet with Kim, ‘Last Night of the World’ gave me ‘goosebumps’. The final scene when Kim gives up her son to Chris and his wife, shoots herself and Chris rushes over and embraces her, was just so believable, it brought tears to my eyes. Another star-in-the-making is eighteen year old Matt Biddulph. His characterisation of the exploitative Engineer was exceptional and he managed to bring out the few incidents of humour with great panache - loved ‘The American Dream’. Another fine performance came from fifteen year old Zak Charlesworth as John. His rendition of ‘Bui Doi’ was so rousingly and powerfully delivered. Good support came from Aishah Mehmet as Ellen and Tom Etherington as Thuy. The young son was played either by Oliver or Jake Billington and the little boy I saw was absolutely delightful and totally focused. All the chorus numbers were well sung and executed with great style and discipline but I would just question the use of the very young children in the more ‘sleazy-type’ scenes. The many scene changes were coped with admirably by the use of some excellent trucks and props and at times were moved by cast members ensuring slick continuity. Miss Saigon wouldn’t be Miss Saigon without a helicopter and what a truly inspirational one appeared before our very eyes, complete with superb sound and light effects it made the whole scene with the barricades etc. so moving. Congratulations to everyone involved with ‘backstage’ for all the wonderful scenic effects - not forgetting the moving windmill! The back projections, good costumes, a superb orchestra together with a fabulous principal line-up and harmonious chorus was well deserving of the tremendous ovation from the audience. To put on a show like this with its complex plot, numerous scene changes, a demanding musical score presented the society with a formidable challenge and they most definitely did rise to it, over came it, and in doing so, achieved great success. My compliments to Leon Wade and to the whole team for creating what was, a truly memorable evening. 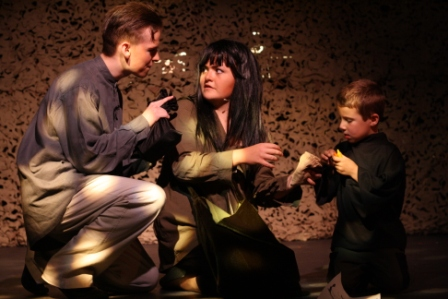