Well I must admit that I have never been to a world premiere of any kind of production and I entered the theatre with some trepidation. I knew that “LIVE” had been a film and that Mark Walker had been given permission to write a stage version of this dark piece of drama and this is exactly what he and his co-writer Leisa Cooke produced – and how! The piece starts off in the office of a TV company in the USA where the executives are pondering on how to come up with a reality show to top all reality shows – “Russian Roulette” was suggested and immediately discarded for obvious reasons! However Katy Courbet, the president of the TV station was determined to get this show networked and this is exactly what she did. What about contestants – would anyone ever come forward? No problems there – all kinds of humanity turned up with the hope of being a winner – 5 million dollars being the prize for the lucky ones – the unfortunate one getting zero We sat through the auditions and heard the reasons why these individuals were prepared to risk their lives. This was very cleverly staged with a camera man filming the auditions with close ups and giving us close-ups by siting two TV screens either side of the stage. A brilliant touch of theatre. So the contestants are selected – all legal difficulties overcome – the tension is beginning to build – end of Act 1. During the interval the stage had been transformed into a TV studio – the contestants (all dressed in white) were on the set accompanied by various members of their families and friends. The clock ticks and transmission time gets nearer. Friends and family are asked to leave the studio and take their seats in the audience. The TV executives retire to the production and viewing area. The host of the show arrives along with his glamorous assistant complete with the gun. The host loads the gun with a live silver bullet – the name of the first contestant is selected – he is handed the gun, places it to his head and pulls the trigger. Throughout all of this the camera is running and we see the face of the contestant in close up. Strong stuff – well you ain seen nothing yet! The tension in the audience is almost unbearable - there are six contestants - have we really got to go through this again, and again and again........ To reveal more would ruin the play but there are quite a few more twists which the audience has to endure before curtain down. This production was one of the most incredible pieces of theatre I have ever seen. Every character was so carefully cast and perfect for the roles they had to play. In a piece like this it is very difficult to name any individuals as everyone was quite simply brilliant – however I feel I must mention Leisa Cooke and “Katy”, Ian Stark as her trainee “Rex” and Ruth Bowe as one of the contestants “Abalone” . The quality of acting and direction was incredible – the audience felt that they knew all of those contestants as real people. I cannot praise this production highly enough. Congratulations to Mark Walker for having the courage to mount such a production. This piece of theatre deserves to be produced by other amateur companies – if they dare! In his programme notes, Mark tells the audience to “sit back, relax and enjoy tonight’s production”. Mark you should have been sitting in the audience with us – no way could we sit back and relax – we were all on the edge of our seats!! Many, many congratulations to everyone involved with “LIVE” – it did everything it said in the advert – quite, quite brilliant. 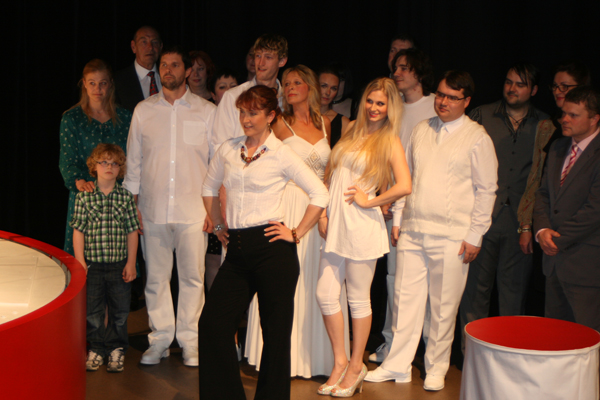