The word ‘sorcerer’, conjures up thoughts of magic, mystery and mischief but if you add singing, dancing and fun to this mixture you have a most

intriguing combination of words, music, dance, action and laughter that is a comic opera, The Sorcerer, written by Gilbert and Sullivan and delivered and brought to life by this extremely talented group of people. The Sorcerer was impressively played by  young teenager, Edward Jowle. His magnificent, mature voice belies his youth and is equalled by his natural flair for acting. He totally dominated the stage whenever he appeared giving a stunning, flamboyant and indeed, magical performance - truly outstanding! Alexis Pointdextre was played with vigour and enthusiasm by the very talented Andrew Moore, and his betrothed, Aline, was delightfully portrayed by Rachael-Louisa Bray. Peter Flint was every inch the dithering, bachelor vicar who was loved by Constance, the housekeeper’s daughter, played confidently by Julie Currey. Phil Bradley was staunchly dignified as Sir Marmaduke Pointdextre and Lady Sangazure was superbly played by Judith Hill. The scene when she tries to ‘seduce’ John Wells was hilarious. Other notable performances came from Raymond Hill as the Notary and Penny Fairs as the Housekeeper. All of the musical numbers from solos, small groupings to the full chorus were exquisitely delivered and were backed by a magnificent orchestrea under the very capable hands of Musical Director, Andrew Marples. The set, costumes and lighting were all good and the fabulous ‘teapot’ with its flashes and smoke was brilliant. What a pity poor Mr. Wells had to sacrifice his life to put an end to all the mix-ups that had been caused by his love potion. Still, that’s a Sorcerer’s life for you! I thoroughly enjoyed a night of magical enchantment and thanks must go to Nic Wilson, Andrew Marples, Catherine Shepherd, the cast and to everyone involved for a night of magical enchantment. (Please don’t hate me though, as I too sometimes go to Meadowhall!!) 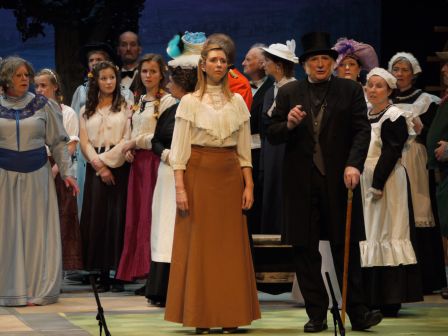 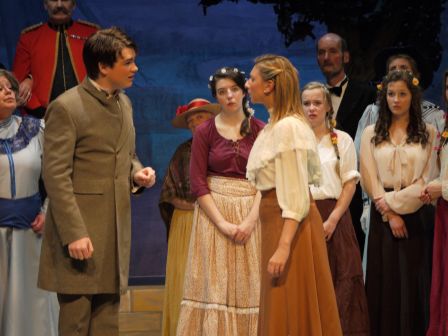